Exploring the Air Element to Heal Grief and Strengthen Your Lungs

The basis of many philosophies and systems is five elements – Earth, Water, Fire, Air, and Space. The names and concepts vary: Metal in Traditional Chinese Medicine is correlated with Air; the Air/Wind element relates to the sense of touch in Ayurveda and smell in Nutripuncture. Space is Ether in TCM, Key in Jin Shin Jyutsu, Akasha in Hinduism, Ku (Void) in Shinto. In spite of these differences, the frameworks provided by these systems still furnish us with productive working information and connections to explore.  Here we look at the Air Element.

Fu (wind): Atop the triangle/pyramid of ka sits the crescent-shaped fu, representing wind, emblematic of things that move, that have freedom, that fly through the air. Fu is the mind in action, thoughts flying about, our mental agility and freedom to create anything out of nothing. Air is invisible, it can’t be touched or smelled or even heard…until it connects with one of the other elements. Then everything happens: fires blaze, water fall as rain, dust moves across the face of the planet. Fu isn’t just air: fu is air in motion. Fu is motivation, growth, change, all forms of movement. Fu is freedom, it is breath, the breath of life, of compassion – even, perhaps, of wisdom. Fu is spirit.1

The Air Element is related to the Lung and Colon (and/or Large Intestine in some systems) organ-function and meridian family. On one level, we are speaking about their physical functions. The lungs are about taking in the breath, life force, sustenance, the new and together with the colon, comes the discernment of what to let go – the expired, the toxic, the impure. This means what is no longer aligned, no longer works, no longer supportive, and in the words of the amazing Clarissa Pinkola Estés, allow “what must die, die.”

We are also talking about the greater picture that goes beyond the organs’ physical functions. We can look at their pathways as well as the philosophical, symbolic, and metaphorical renderings. These include inspiration, organizational skills, healthy and productive perfectionism, and idealism as an intellectual exercise or change-maker actions, for example.

An imbalance of the Air Element can push us into the unhealthy spectrum of these attributes and vice versa. Try this breathing meditation – exhale – “let go” and inhale – “inspiration”.

This delicious recipe was given by Amber Sawyer of Satsanga Wellness. She is an Ayurvedic Lifestyle Consultant, Elemental Yoga Therapist, Meditation Facilitator +++

Add 2 tsp of the mixture and 1 cm ginger root (grated) to a jug. Pour 1 litre of boiling filtered water to the jug and allow it to infuse for 10 to 30 minutes. Strain the mixture and pour the tea into a thermos. Drink at room temperature throughout the day.

It makes sense then that the related emotions are grief and sadness. We grieve when we feel we experience a loss. The stagnation of this natural process points to our inability to let go, grieve completely, and allow the new to enter. There is great power and gifts in grief and sadness.

We generally have issues with these emotions. They can overwhelm us. We fear both that we may never rise up from these depths and isolation and live without a hole in our hearts and that we may do that, racked with guilt.

Displaying any emotions, especially anger and sadness, in public makes many people uncomfortable and is often frowned upon. Often we resort to old and tried though oftentimes unhelpful sayings. We may do that out of social obligation, to assuage our own grief or discomfort, and of course, just wanting the other person to feel better or not feel so bad.

If we dig deep and be honest, what we say is not always altruistic through and through. Why not simply ask “what do you need? What do you require?” Take the ego and our needs out and be completely present with the other person.

Emotions are messages, gifts, and lessons for us. If you are interested in exploring this, Language of Emotions by Karla McLaren is a comprehensive resource. She also provides a wealth of information and tips on her website www.KarlaMcLaren.com, including the Language-of-Emotions-Reading-Guide.

(In many traditions, still practiced here and there, we once wailed to both process our loss and to help send the spirits onwards. In other traditions, quiet is preferred as not to pull back the spirits and disturb their onward journey.)

With the element of AIR, we learn the art of surrendering to the interconnected nature of all things, the relationship between releasing what no longer serves us so that we can receive. When this element is in balance, we are able to move with grace through life’s changes, letting go when it is time, and being receptive to whatever is arriving. When this element is out of balance, we may feeling a resistance to change, and express a desire to remain in control of how things unfold.

We have probably all been reminded that the sun rises not knowing it is the sun or the moon shines or the rose blooms with no concept of anything else. And so the trees shed their leaves after a wondrous display of ambers, acres, yellows, and purples. It is time to let go.

This is not a loss, only part of the natural cycle, with a firm knowing that a new cycle begins in its own right time. This is a knowing so innate and inherent that it is not named. It is unnecessary to name.

Sometime we shed what we cannot tend to so we can focus on what requires the most immediate attention or to nourish the core in waning times. In the Autumn we shed so that we can be bare in the winter, moving inward, with just the essentials, so that when we rebirth, break through anew, we are refreshed, more authentic with each cycle.

The Air Element is associated with touch in the Ayurvedic system and smell in Nutripuncture. In Ayurveda, air is also wind, the principle of vibration and wind connecting with skin is touch. This is the element of movement.

In Nutripuncture, the master meridians Lungs and Colon interact with secondary meridians, the ones that govern the system relating to smell. “Normally, the rhinencephalic system in human beings is under the control of the neo-cerebellum. It has been observed in Nutripuncture that this relationship is sometimes reversed…This inhibits the expression of individuality, and pushes the person toward a gregarious group identity and conformist attitudes, separating the individual from his or her own inspiration and feelings.”2 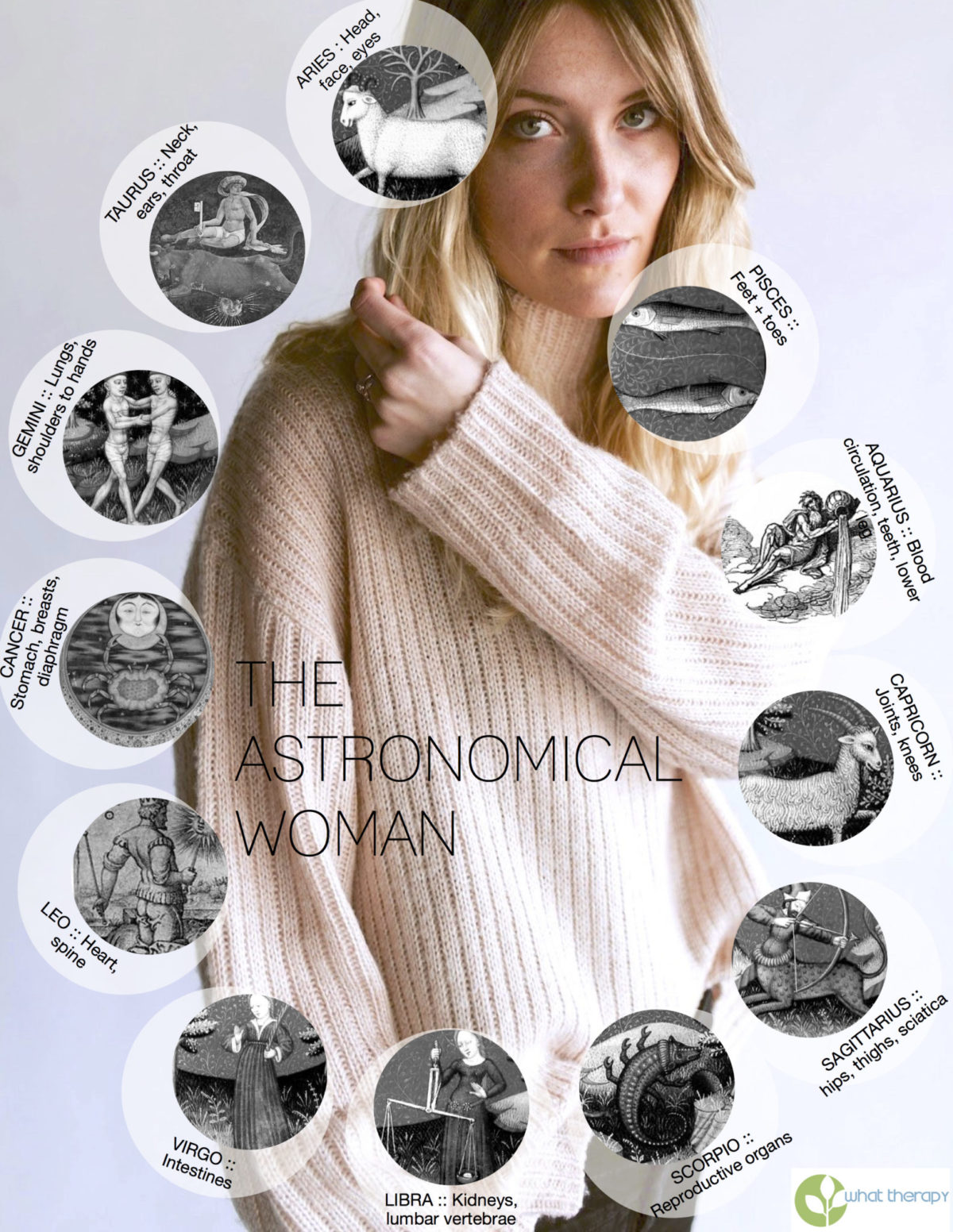 In Astrology, the Air Element includes the signs Gemini (ruled by Mercury), Libra (ruled by Venus), and Aquarius (ruled by Uranus/Saturn). This element also rules the third (communication), seventh (relationships), and eleventh (friends and allies) Houses. Intellectual. Communicative. Curious. Inventive. Idealistic. Like air or the wind, people of these three western zodiac signs are a challenge to pin down which also means being grounded can be an area for improvement. (The actual disposition of Sun in Gemini, Libra, and Aquarius people and the amount of the Air Element of course depend on the entire chart). Each of these three signs expresses the Air Element differently…

Gemini will manifest the element of Air as an acute ability to instantly notice and communicate about everything in its environment.

Libra will apply the element of Air as a drive to use its intellect in a way that promotes social harmony.

Aquarius will utilize the element of Air to achieve the most remarkably detached ability to connect all people and every concept.3

Tarot works with four elements, through the four suits – Pentacles (Earth), Cups (Water), Wands (Fire), and Air (Swords). The Swords represents the mind and thoughts – intellect, discussion, and logical reasoning. The negative aspects come from the mind’s ability and in some cases, tendency, to project and create illusions and delusions. The power of the sword is to cut through what is false and illuminate the truth, as Archangel Michael does with his sword. Air, with beautiful ideas, can fuel fire of action and creativity.

The Platonic Solids represent a blueprint for all the cell structures in the bodies of humans, animals, plants, and minerals.

Platonic solids are the three dimensional analogs of regular polygons (equilateral and equiangular shapes). Named after Greek philosopher Plato, these shapes far preceded him. Plato believed that the platonic solids are building blocks of everything, a theory that is actively researched by people such as Nassim Haramein. Plato also suggested that the dodecahedron is the quintessence, the cosmos. Some scientists believe just that – space as a finite boundary-less dodecahedral space.5

The five platonic solids, each linked to an element, are the tetrahedron (Fire), icosahedron (Water), octahedron (Air), cube/hexahedron (Earth), and dodecahedron (Ether). The octahedron is made up of eight triangles with their square bases placed base to base. Fluorite and diamond are examples of this naturally-occurring configuration. The octahedron illustrates the alchemical role of Air working with and bridging the Fire and Water elements.

There are many other associations including colour – yellow or white. In philosophies that relate the Air Element with yellow also associate it with spring, rather than the autumn. Related animals include the winged ones – butterfly, bee, hawk, hummingbird, owl, and most birds. Trees and plants that move fluidly in the wind such as birch, lemongrass, pansy, and primrose fall under this element. Air deities include Mercury and Thoth. Essential oils for the Air Element include Lavender, Lemongrass, and Peppermint to boost communications, wisdom, a sense of freedom, and divination.6

We are made of all the elements. Working with the elements is a beautiful way to anchor more deeply in our own lives and within the environment.

The Air Element is one of these five elements. When we strengthen and balance this element in the autumn we can improve the physical functions of our lungs and colon – the respiratory and elimination system. We can also improve our discernment of what to let in and what to let go off, so that we are in flow with the design of our life.

There are so many ways to work with the Air element. What are your favourite?

1 Five Elements in Japanese Culture by David Watts Barton in Japanology
2 Nutripuncture: Stimulating the Energy Pathways of the Body Without Needles. by Patrick Veret MD, et all. Healing Arts Press. p171.
3 The Air Element by By Maria DeSimone on Tarot.com
4 The Air Signs on Truly Teach Me Tarot : The Art of Holistic Tarot Therapy
5 Platonic Truths: The Shape of the Universe in the Economist
6 Essential Oils and Elements Earth, Air, Fire and Water on Bio Source Naturals