Message In A Feather

Are you seeing feathers? On your walks. In random unexpected places. Floating down onto your hand. Have you wondered what is the meaning of feathers?

Feathers mean different things to different cultures, many of which believe feathers carry messages and stories. Feathers, like birds, are magical and mystical, a connection to the spiritual realm. It is said that messages and prayers move up through the feather’s hollow stalk to the heavens and blessings come down. Think traditional headdresses decorated with beautiful plumes worn in ceremony.

The feathered have always fascinated humans, who are grounded and bound to the earth.

Which bird is special for you? Is it the owl? Raven? Robin? Eagle? Hawk? Or maybe it is the Phoenix, the symbol of rebirth and resurrection. Birds, with their power of flight, connect earth and sky and are also associated with transcendence. Is it not just amazing that something as light as a feather can carry these creatures into the skies? Perhaps seeing a feather is a reminder to have faith, transcend the mundane and the logical, and believe in magic. Every feather can become a sacred object, or a fetish1, which is used by peoples everywhere, in the past and now.

Some birds, in some cultures, are omens and messages of impending death. What is death but another journey? (Try I heard the owl call my name by Margaret Craven)

Whether a hawk, an eagle or a tiny hummingbird, all birds awaken a sense of wonder and enchantment by their ability to fly. They remind us that we all can rise above our circumstances. They are the ultimate symbols of transcendence.

Throughout history and mythology, we find birds as god’s messengers, gods as a feathered serpent or with a hawk’s head. We have Pegasus, the beautiful winged horse of Greek lore. The Egyptian Goddess of Truth and Justice is Maat, often depicted with vulture feather, who weighs the heart against a feather to discern if it is heavy with guilt and sin or light and unburdened.

feathers, the type of feather we find can be a message to give air and space to a specific domain in our life. We can also gain additional insight by learning which bird the feather fell from.

The symbolism of some birds include intelligence, past-life connections for the Crow, new growth and throat chakra for the Robin, freedom and higher perspective for the Seagull, and fertility and archetypal energies for the Pigeon.

According to Ted Andrews in Animal-Speak, the four types of feathers support three purposes – “they give great lifting surface without weight, they can be fluffed by the bird to trap air and insulate against the cold, and they provide a protective coat.”2

When angels are near feathers appear

The meaning of feathers is extensive. Some people believe that feathers is a sign from angels who send a physical manifestation of their high vibrational energies to communicate with us. Melanie Beckler shares what messages may be associated with the different colours of feathers you receive. You may think, where on earth would a pink feather come from? That is part of the magic! 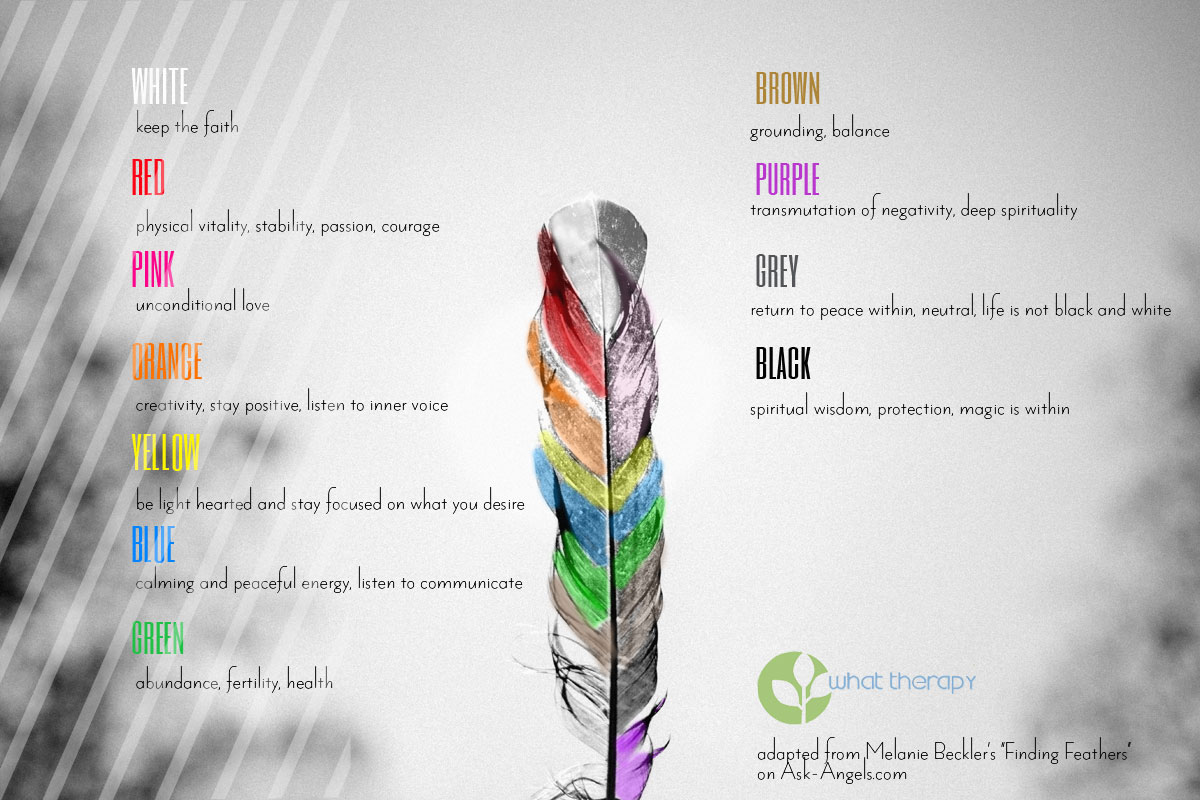 The different colours can represent a different vibrational frequency or associated with a chakra. You can also think back to the moment you found the feather or the feather found you. What thoughts were you having? What energetic state were you inhabiting? Were you asking for help or confirmation? Find what the meaning of feathers is for you personally.

1 The word fetish comes from the word “feitico” (Portuguese), meaning “charm”. A fetish is a sacred object, one with magical or mystical powers, often used as an amulet, talisman, or to perform a specific purpose in shamanic rituals and ceremonies.
2 Animal-Speak by Ted Andrews, p 94.

Sandra Shih / About Author
Sandra Shih is the editor of What Therapy. She is also a Jin Shin Jyutsu and Quantum Biofeedback practitioner and a certified Heartmath Resilience Advantage Trainer. Her focus is self-care and resilience through effective energetic management.
More posts by Sandra Shih